Isolation Blues: The Trials and Trails of Social Distancing–Chapter 5

Still furloughed but not locked down, I look for multiple ways to keep active during the crisis. Of course I watch some Netflix but in reality I am keeping busy without TV. My book reading has increased as I continue to read some good ones. Carolyn has now been working from home in our small condo so I attempt to find ways to keep out of sight and out of mind. My bike rides to Costco, Sprouts, Safeway, etc have definitely increased as well as just getting out on the canals.

On the canals, I have been entertained by the young ducks who were recently born and out swimming with their mothers.

As I ride along the canals, I have discovered some interesting places to grab libations. OSHO Brewing (Arcadia) located right on the canal has been the benefactor of multiple stops by me. They are always friendly and welcoming plus good price on beers to go, (meaning enjoy on the canal). Further on in the Old Town Scottsdale area, Blue Clover Distillery has had great prices on to go beers for $2.00 up to 64 oz. Smoking deal and a fun place to stop while riding around. SIP Coffee and Beer in Scottsdale also has been a nice stop on my biking journeys with either Jordyn or Carolyn.

On my trips back to Payson, I have returned to my bygone days of walking/hiking and picking up aluminum cans along the journeys. Headed west out of Payson along Doll Baby Ranch road, I am constantly surprised at the number of items tossed out of vehicles along the road. Now I don’t pick up all trash just the cans as I eventually turn them in for a few dollars as a fun way for me to get some exercise and a small reward for that exercise.

The area down to the ranch is quite scenic and I’m sure those that pass my on the road probably wonder what I’m doing dragging around a bag with cans but I’ve been doing these things since the 1970’s. Carolyn has been a good sport and joined me for several days of long walks in the sunshine (think Vitamin D) picking up cans. One of our finds included a Trump for President pin that Carolyn discovered on the side of the road. 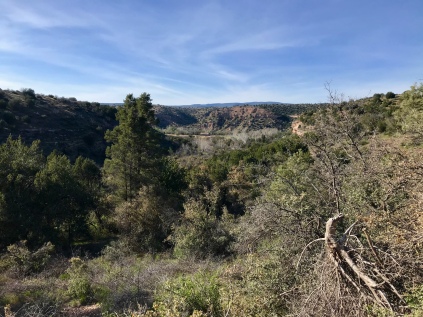 After some of these walks, I have been able to social distance sip some bourbon with my Payson friend Mike and sip some Scotch with my friend and neighbor, Sir Andrew Sarcinella. Always fun to discuss life over some good Scotch or bourbon.

Our daughter Jordyn even suggested a walk picking up cans to relive some of her days picking up cans with Dad. That walk took us along a very popular OHV trail close to the East Verde River and we were shocked at the amount of trash left behind from people who used the road for dumping household garbage. My days walking roads has been quite rewarding and fun as the company has been great and getting outdoors picking up some cans has been a great flashback to bygone days. One can only wish that people would have some common courtesy and common sense that littering our great outdoors is a giant travesty. If every one would do their part the obvious would not have to be stated. 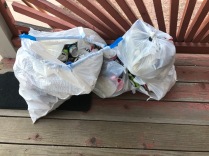 Back to Phoenix I go, looking forward to more adventure in the simple things in life. Low cost and low budget is the way it is when furloughed. Coming up some new hikes and adventures as rules are relaxed