Isolation Blues: The Trials and Trails of Social Distancing–Part One

As I sit in isolation with my dog, I thought why not catch up on some of my own trials and some trails that I have blazed during these quarantined times.

On the first Friday of March COVID-19 was becoming much more then a blip on the radar in the USA with more and more spread and more and more discussion of what would happen. People had started cancelling trips, toilet paper was becoming a commodity of great value, and the run on paper towels, sanitizing items, bleach, and canned foods was in full swing. So Carolyn and I took off to hike up Black Mountain in Carefree.  I’m not certain why we had never hiked this trail but we loved it. It is approximately 2.2 mile roundtrip with close to a 1300 foot elevation gain over the 1+ miles to the summit. Hardly anybody on the trail and it was great as we were rewarded with some great 360 degree views. At the summit is the USMC flag which is kept in great shape. Trail rocky and steep and of course always be on the lookout for snakes since hikers sometimes encounter them on the trail. Much preferred this trail to Piestewa and Camelback due to less people and less steps.  Much more forgiving on back and knees. 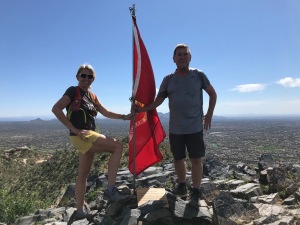 Afterwards we stopped by one our favorite places, the Cave Creek Beer Company which is part of Indigo Crow. Beer is good and food is good and Happy Hour is awesome.

The following Thursday, March 12, the Coronavirus was now becoming a major issue in the USA as travel was being impacted and events being canceled, yet Carolyn and I decided to hop on Southwest Airlines and head to San Diego in the rain to continue our quest to finish the Five Peak Challenge in Mission Trails Regional Park. Our plane was half full as travel had become impacted with the fear of contacting COVID-19. After landing in San Diego, we jumped on the bus and headed into the city to pick up our rental car to drive to the park. Rain was initially light but became quite heavy. We were able to get to the summit of Cowles Mountain and from there we hiked across to Pyles Peak. We got drenched and socked in by the clouds so there wasn’t any views for us but it was quite the adventure. Drenched, muddy, cold, and tired we still hiked 6.5 miles with total elevation gain of around 1900 feet. We started at the Golfcrest Drive Trailhead. On our way up to Cowles Mountain, we did see a few hikers but not many. From Cowles to Pyles and back, we saw zero hikers. So in some ways it really was fun to be out and on our own. 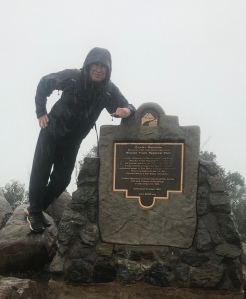 On the way back to drop off our rental car, we stopped at Costco so Carolyn would have some dry pants to wear. And we actually saw toilet paper. After dropping the car off, we got on the trolley and headed over to the bus depot area, and hopped on the bus to Hotel Del Coronado. Upgraded our room since hardly anybody was there as the hotel was very quiet. Even left extra toilet paper.

We walked on over to the Brigantine Seafood Restaurant for happy hour. Food was amazing and we had some craft beers that we had never tasted.

Friday came along and time to head out after breakfast and few stops at local breweries. During the day, I received a call that I was being furloughed since the number of cancellations at the hotel had become numerous. We also received a call from the St. John family that since the cost of plane tickets had plummeted, they were headed to Arizona to visit. So I wouldn’t working but would have the opportunity to visit with friends we haven’t seen in way too long.

The airport was sort of chaotic as rumors on COVID-19 were flying around and it appeared that many were trying to get home. Our flight was full and we were happy to be on it as they had combined some flights to make ours a full one.

Back to Arizona and beginning my furlough while Carolyn heads off to chaos in the airline industry. Panic is setting in and the first wave of restaurants and bars in the Phoenix closing for only curbside and to go service takes place. No toilet paper, cleaning products, and panic buying in the grocery and meat departments begins in earnest. The St. Johns arrive and we head off Payson where things are still open for business but panic buying has arrived with many empty shelves. The weather is not cooperative so we are stuck indoors for most of their visit. Of all the times for lousy weather, this would be that time. Carolyn arrives on Thursday, beat up from a horrendous week of work at Southwest. To add to it, Carolyn and I are both not at our best physically.

Anyhow we finally get a break in the weather on Saturday and we all head to Pine for a stop at the Randall House. That was disappointing as you could clearly tell they were not happy to have us as guests. From there we went to Tonto Natural Bridge and were able to walk around but the trails down to the creek were closed due to an abundance of rain and trail damage. It was great to see the sun and be outdoors in a beautiful setting. Carolyn heads back to Phoenix for work and the St. Johns head back on Sunday so they catch their plane back to Michigan. It was good to see Rachel, Ryan, their sons and daughter and they all seem to be doing well.

As we head into a new week, I stay in Payson with Roxy, our dog, for a few extra days piddling around the house, getting out picking up aluminum cans along the roadways, and finding time to read. Carolyn is still not feeling well but with no fever continues work. On my trip back to Phoenix, I decide to bring my cruiser down so I can get out and ride the canals and streets of Phoenix as I combat the isolation blues. Stay at home orders are on the horizon. It’s a strange time and I know there are more trials to overcome and more trails to discover. To be continued.