Cinco de Mayo: A Journey Back In “Time” when you “Took My Place”

Every year when Cinco de Mayo comes around, I am always ready for a house party. No not because it is an opportunity to drink Mexican beers, but rather I always reflect back to a Cinco de Mayo celebration many years ago. This 5th of May was extra special as I celebrated my 15th anniversary of my first ever Third Day concert.

You must be thinking, really? What is so special about that? After first hearing of Third Day in the winter of 2000 from a student who introduced me to their music, I was hooked. The southern style with driving guitars and a strong graveled voice just took me by storm. I was convinced this band was the real thing. Faith-based but still a band who could hold their own against any rock band out there. Lyrics that actually meant something backed by and played by outstanding musicians. It was an incredible discovery for me.

Anyhow, I checked out their website www.thirdday.com and discovered that they were playing in the Phoenix area on Friday May 5, 2000 at a local church, The Valley Cathedral located on North Central Avenue, on a tour for their latest album Time. I must say the album is still one of my all-time favorites and is one that I return to frequently.

Without any hesitation, I buy tickets for the family. So Carolyn and I load up the girls, Caitlin and Jordyn, and head out to this concert. This is 15 years ago when Caitlin was all of 11 and Jordyn was 5.

I’m thinking that there was no reason to be in a big hurry, after all its just a “Christian” band playing and they can’t possibly have that many fans. So we stop and eat some Mexican food in honor of Cinco de Mayo at some place fairly close to the church. We finally pull in the parking lot around 6:00. Oh my goodness, we were dumbstruck as there was a line completely around the church and through the parking lot waiting for the doors to be opened. I’m thinking I have blown this one. It is very warm and we are about to go stand in a line that stretches endlessly.

hey have any special seating for those that are hearing impaired since Jordyn had an impairment. Well Jordyn and I walk all the way to the front and I ask the gentleman about any special seating and he tells me no we don’t but why don’t you guys go on in and find any seat that you think would be a good spot to hear. I’m like stunned, ok so Jordyn and I walk back and round up Carolyn and Caitlin and go back up front and they let us in. This is not an exaggeration, they just let us in. Talk about shameless, well what can I say? We sort of have to laugh about it now but it is what it is. No regrets!

Now we go on in and notice that all the seats on the front rows are taken  by church volunteers who have staked out their seats prior to the doors opening so I suggest that we go to stage left which is probably stage right when you are on the stage and we take our seats on the 2nd row. Soon the doors open and it is incredible to watch the place completely fill to capacity.

The warm up band was Jennifer Knapp and we knew her music and enjoyed her part of the concert. Soon the lights went down again and some music starts playing across the speakers and out comes Third Day about seven feet away from us. They break out into “Took My Place” which absolutely tore the place up. They are like right there and I sure didn’t know that the lead singer, Mac Powell, was a southpaw and it was like he was looking right at us. It was an incredible concert and we were blown away on how good this band was. Charismatic, playful, friendly, but yet sincere, and genuine. I can’t find the superlatives to describe how good they were. And as an added bonus, I had brought my camera and Mac would really have some fun making faces into the camera. I just can’t describe it. 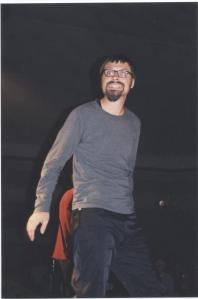 I was completely taken and became a fan for life. We hung out after the conclusion and got a set list from the stage and headed out to the car walking on clouds. This is where my brains engage and I think maybe we can see these guys if we hang around over by their bus area so we drive around to the other side of the church and sure enough there is Third Day. Brad, Tai, Mark, and David have got into some beater van that looked like one of those Ford Econoline models that had long seen better days. Mac is out talking to some people and I think that this is the opportunity to get a picture with the lead singer and my girls. Mac is most gracious and says no problem and I think the picture is a classic. One of my very favorite pictures of all time. 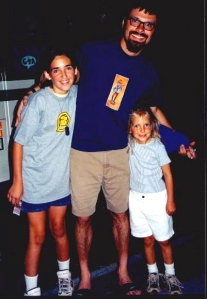 I am convinced that I have witnessed quite possibly one of the best bands of all time. They were really that good. Who would have known that I would soon become one of those crazy fans that would actually get to meet and hang out once in awhile with these guys. I posted of our adventure on their old website and was so taken with the group that I went to Arizona Motor Vehicle Division to see if I could get a personalized plate with 3RD Day on the plates. Lo and behold, somebody had given up

the plate name about a week prior to me asking for them. Fate? I don’t know but I do know I was changed forever. From Atlanta to Los Angeles, Green Bay to Nashville, Houston to Denver, Albuquerque to Phoenix, I’ve been there to see them. I’ve met so many nice and welcoming Third Day fans from across the country. Many will always be considered friends. It has been quite the adventure and it all started innocently enough on a Friday night, May 5, 2000 aka Cinco de Mayo. It is a day that always means something extra special to me.

Yes I’m a fan. Yes I will always be a fan. I’ve been blessed beyond measure in this incredible journey. I’ve met sports stars, rock stars, movie stars, hung out in dressing rooms, kicked back on tour buses, who would of thought that it all started out on a Cinco de Mayo 15 years ago. I didn’t know at the time that I was living the dream but I do now. So that’s my beginning of a 15 year relationship with the best band in the land–Third Day. Rock on!

Here is a look at their very first video release and was the go to song of the early 2000’s “Consuming Fire“.

1 Response to Cinco de Mayo: A Journey Back In “Time” when you “Took My Place”