Ah, Game Day has arrived in Denver. Breakfast is served and I sneak into the Homewood Suites side of the hotel for my free breakfast since it looked a little better then the Hampton side this morning. It is a bit overcast to start and Carolyn decides that we need to run after eating so away we head down the street, across the river, along the river, and towar

ds Sports Authority Stadium. A quick pic and we head back on our run this time stopping in at a world class REI. It is like a

warehouse looking building with a Starbucks inside so Carolyn goes a shopping and me a hanging out with some coffee. I must admit, this REI is spectacular in every way. Climbing walls, lofts, Starbucks, huge camping sections, it is something you have to see to believe. Knowing that we were going to stop, I brought along a card because I just knew Carolyn would find something to buy and we did. A Denver Starbucks coffee cup and a clearance North Face sweatshirt for (can you guess who?) wrong not me but the other half. We make a deal between us and the transaction is complete.

Now to get back to the hotel. You guessed it, off for th

e finish of the run with Carolyn packing the goods like she is running with a football or maybe like she is running from the cops. It sort of looked that way as we run down the road. The run finally ends and it is time to get ready for some Sunday Night Football. Woo hoo, time to pull out the Aaron Rodgers jersey and go green. I’m all about going green.

After cleaning up, we head down town for some pregame activities and watch some Sunday afternoon football and I get to see the Bengals beat the Steelers so that is a plus. Caitlin and Bryan are all decked out in their Bronco gear and as we walk around we see a whole bunch of green and yellow right alongside the Bronco faithful. 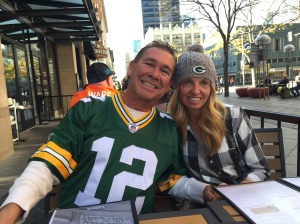 Very cool downtown scene has unfolded. One of the places we stop on 16th is Henry’s Tavern. Fun place and packed with fans from the Packers and Broncos. So we get pepped up and ready for some football. Us vs Them. What a great Sunday afternoon, warm and welcoming. We talk about taking the light rail system to the game but in the end we once again go with Uber. Nice guy and he rolls us over to the stadium and it is time to tail gate with whoever wants to feed us and provide us with

So of course we head into the parking lot and to the Packer faithful. One can argue but without a doubt the Packer fans travel better then any other fans and they are arguably the friendliest fans in the NFL. Sure enough we get hooked up with Coors Lights if we want them and burgers and a whole smorgasbord of foods. I jump right in the middle of t

he fun. We meet some young fans from Green Bay who are a laugh a minute and one of them tells us all kinds of cool things about his family and Green Bay and back in the days when they played some games in Milwaukee. He tells Carolyn and I that he can hook us for some tickets in Green Bay next year. I get his phone number and who knows it might be worth the effort. Another trip to Green Bay? I’m down with that.

Carolyn and Caitlin are the hits of the tailgate parties as Bryan and I carouse through the area. Lots of laughter and good times are to be had. It is very rare when you see fans from opposing teams get along so well. Lots of interesting and well represented vehicles out in the tailgate areas. One guy from

Wisconsin drives this 1966 RV to one away game a year. It is all Packers insi

de and outside. The gentleman tells me the story, welcomes me into his Packermobile and gives me his Packer history. All the games, all the memories, it is quite fascinating. Of course there are some very cool Broncomobiles as well. This is like an adventure just being in the tailgate section.

I think it is safe to say “we are having a good time!” (This Sunday Night Football clip was from the Spanish broadcast but only one I could find with a Packer/Bronco part in it.)

Bryan and I head into the stadium and our women head to a sports bar, Brooklyn’s, located next to the stadium. Sounds like trouble but I’m certain they are going to be quite popular “over there.”

As I probably stated, Bryan is a season ticket holder so I am a most thankful beneficiary of his generosity as two unbeatens are about to wage a football war. We head to the seats and the stadium is a rocking. Chants of “Go Pack Go” are echoing through the stadium due to the Green and Yellow almost everywhere. Of course the Broncos outnumber the opposition but I think it is safe to say, many of the Bronco faithful sold their tickets to out of towners.

The game unfolds and I am living the dream being on the road to see such an event. We all know that the Packers end up getting orange crushed by the Broncos but that doesn’t take away from the fun I’m having. As we leave, I’m still walking in the clouds and will not be heartbroken over a football game.

We gather up our giddy women and decide to walk the two miles or so back to the hotel. Caitlin and Carolyn have all kinds of adventure stories to tell us about their barroom experience at Brooklyn’s and Carolyn has been injured by a massive Packer fan that gave her a crushing hug. How many can say they probably got bruised ribs from being hugged? Well at least they had a blast and survived. They are most entertaining on the walk back to the downtown. We end up at Rock Bottom Restaurant and Brewery because it is open and lucky for us, late night happy hour food specials! Our timing is impeccable. (We had to wait about 10 minutes to order to get that pricing but that’s the way Bryan and I get it done.)

The morning plane ride back to Phoenix awaits and I am disappointed only in the fact that the Packers saved their worst game for me. My favorite, Aaron has his worst game of his career and I’m there to see it. Boo hoo life goes on and I’m just saying even with a crushing loss, this has been the weekend of a lifetime. Carolyn and I had the best of times with Bryan and Caitlin. We will be forever thankful that they suggested the trip and invited us to go. Our live like we are dying moments are things that we will always relish. Living the Dream marches on.